Britain today announced 25 more coronavirus deaths as data showed half of NHS trusts in England have gone a week without a death and no fatalities have been recorded in Scotland for four days in a row.

Department of Health chiefs say the lab-confirmed death toll now stands at 43,575 but the real number of victims is thought to be in the region of 55,000 when all suspected deaths are taken into account.

Just 15 fatalities were announced last Monday and 36 yesterday — but the number of deaths recorded on Sundays and Mondays are always lower because of a recording lag over the weekend.

Statistics show the rolling seven-day average daily death toll is now 117, slightly up on yesterday’s 116 but down on the 131 registered last Monday as the outbreak continues to fade away for now.

An analysis of official data released today showed the number of NHS trusts having suffered no Covid-19 deaths in the past week has risen to more than half, while 84 per cent have gone without a fatality for 48 hours.

In other coronavirus developments in Britain today: 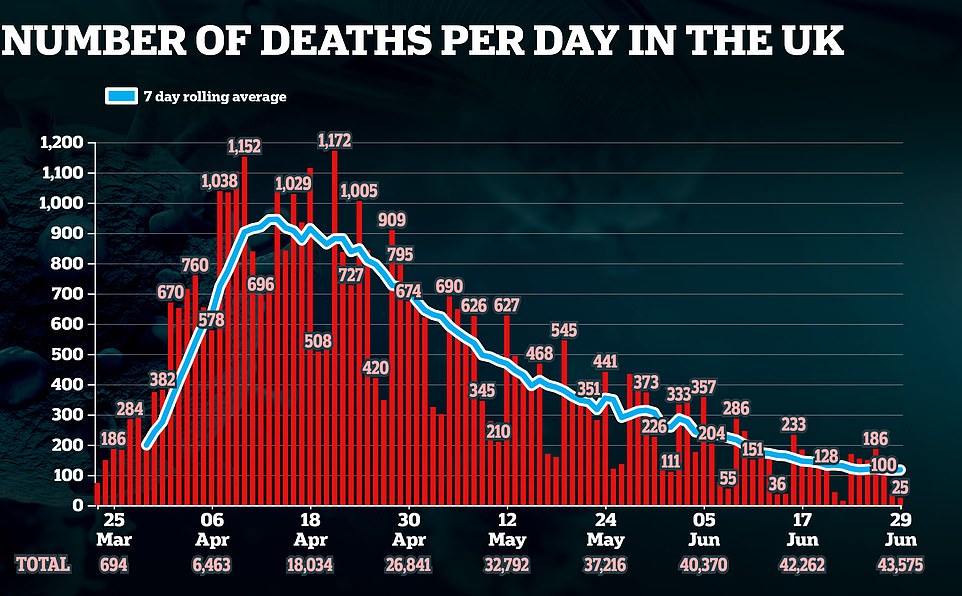 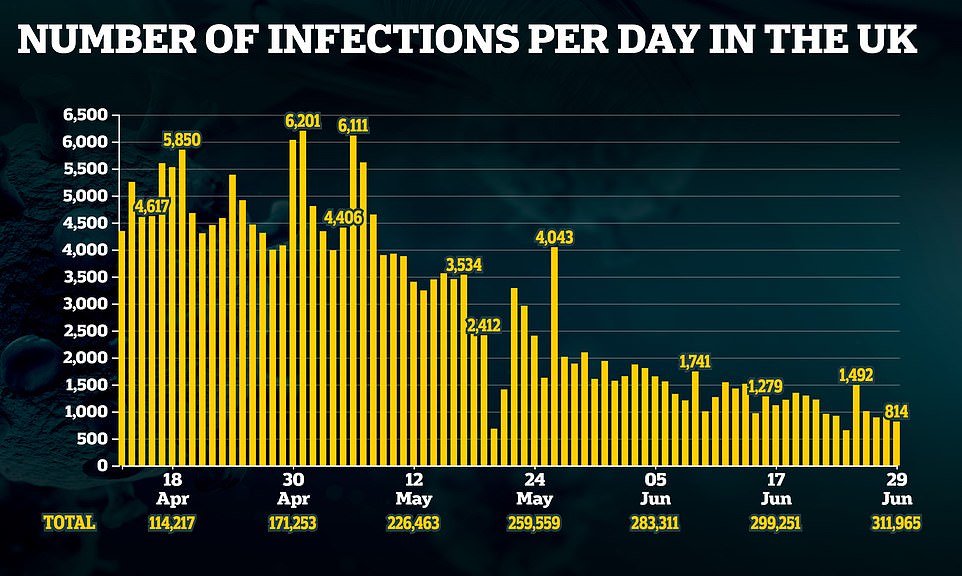 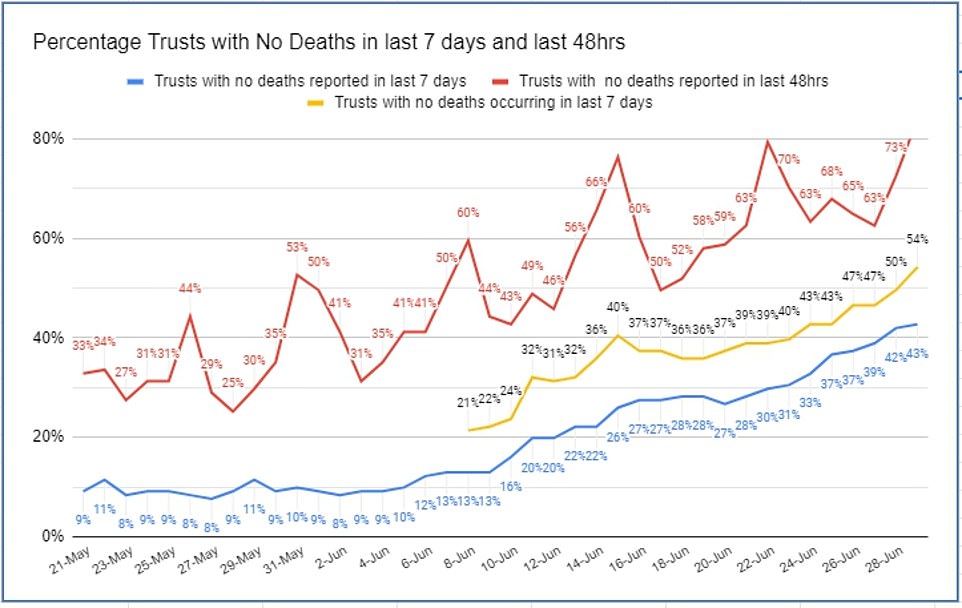 An analysis of official data released today showed the number of NHS trusts having suffered no Covid-19 deaths in the past week has risen to more than half, while 84 per cent have gone without a fatality for 48 hours

HOW MANY PEOPLE HAVE REALLY DIED OF THE CORONAVIRUS?

Department of Health’s latest death count for all settings stands at 43,575.

The daily data does not represent how many Covid-19 patients died within the last 24 hours — it is only how many fatalities have been reported and registered with the authorities.

It also only takes into account patients who tested positive for the virus, as opposed to deaths suspected to be down to the coronavirus.

Data compiled by the statistical bodies of each of the home nations show 53,785 people died of either confirmed or suspected Covid-19 across the UK by the end of May.

The Office for National Statistics yesterday confirmed that 48,866 people in England and Wales died with confirmed or suspected Covid-19 by June 12.

National Records Scotland — which collects statistics north of the border — said 4,117 people had died across the country by June 14.

Their tallies are always 10 days behind the Department of Health (DH) because they wait until as many fatalities as possible for each date have been counted, to avoid having to revise their statistics.

The total number of excess deaths has now passed 65,000.

Excess deaths are considered to be an accurate measure of the number of people killed by the pandemic because they include a broader spectrum of victims.

As well as including people who may have died with Covid-19 without ever being tested, the data also shows how many more people died because their medical treatment was postponed, for example, or who didn’t or couldn’t get to hospital when they were seriously ill.

Department of Health figures released today showed 93,881 tests were carried out or posted yesterday. The number — the lowest for a fortnight — includes antibody tests for frontline NHS and care workers.

But bosses again refused to say how many people were tested, meaning the exact number of Brits who have been swabbed for the SARS-CoV-2 virus has been a mystery for a month — since May 22.

Health chiefs also reported 815 more cases of Covid-19. Government statistics show the official size of the UK’s  outbreak now stands at 311,965 cases. But the actual size of the outbreak is estimated to be in the millions, based on antibody testing data.

The daily death data does not represent how many Covid-19 patients died within the last 24 hours — it is only how many fatalities have been reported and registered with the authorities.

The data does not always match updates provided by the home nations. Department of Health officials work off a different time cut-off, meaning daily updates from Scotland as well as Northern Ireland are always out of sync.

And the count announced by NHS England every afternoon — which only takes into account deaths in hospitals — does not match up with the DH figures because they work off a different recording system.

For instance, some deaths announced by NHS England bosses will have already been counted by the Department of Health, which records fatalities ‘as soon as they are available’.

NHS England today posted 19 deaths in hospitals across the country. Wales recorded three Covid-19 fatalities in all settings, followed by one in Northern Ireland and none in Scotland.

Analysis by researchers at the University of Oxford shows that half of hospital trusts in England (54 per cent) have now not had a single death from the coronavirus occur in the past seven days.

Professor Carl Heneghan and Dr Jason Oke found that 110 trusts (84 per cent) have recorded none in the past 48 hours. They took the data from a total of 131 major NHS trusts.

Scotland’s First Minister Nicola Sturgeon revealed there had been no new deaths north of the border in an official government briefing this morning.

She said: ‘This is the fourth day in a row when no deaths of patients confirmed through a test have been recorded in Scotland.’

‘Now, of course, two of these days have been weekends and we know that registration can be artificially low at weekends, and we may see more deaths registered later this week.

‘But there’s no doubt that these recent figures demonstrate beyond any doubt how much progress Scotland has made in tackling Covid and that is down to the efforts and sacrifices of everyone across the country.’

Ms Sturgeon — who last week claimed Scotland was ‘not far away’ from eliminating the coronavirus — added: ‘I want again to say a heartfelt thank you to all of you for that.’ 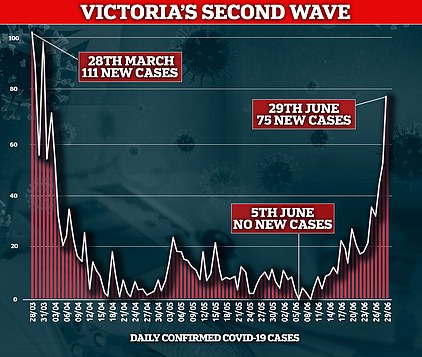 Australia’s Victorian government is considering fresh lockdown measures as the state is swamped by a second wave of coronavirus.

Chief Health Officer Brett Sutton today said he would recommend ‘anything necessary’ to stop the spread after 75 new cases were reported on Monday.

The last time Victoria recorded that many cases was on 31 March when 96 new patients tested positive.

The state’s highest new daily case number came on 28 March when 111 cases were reported. That day was the peak of the pandemic in Australia with 460 new cases nationwide.

In other developments today, Portugal has reacted with fury after apparently being left off a list of countries that will be able to form quarantine-free air bridges with the UK.

Tourism is the largest sector of the Atlantic nation’s economy and many areas including Lisbon, Porto and the Algarve are popular with UK holidaymakers.

But it is understood that the nation will not be on the initial list of green or amber nations allowed to couple-up with the UK under a traffic light system, as it is the only European nation with a higher rate of coronavirus infections than the UK.

It comes as language barriers and poverty were blamed today blamed for the coronavirus surge in Leicester as it was revealed the city may be forced to extend the lockdown for a fortnight from Saturday.

Sir Peter Soulsby said the Department of Health wrote to him this morning suggesting it will ask him to postpone opening the city’s pubs, hair salons, museums, playgrounds and other public buildings such as libraries on July 4 until July 18.

The Government has made the recommendation after 866 new Covid-19 cases in the past fortnight, concentrated in the eastern part of the East Midlands city.

But it is not yet clear if health chiefs have already decided to impose the lockdown extension on Leicester, which has seen the army sent in today to staff makeshift Covid-19 testing centres.

Labour city councillor Ratilal Govind told MailOnline that he thought there had been a lack of communication with people who do not speak English as a first language in the city, which has 28 per cent of its population of Indian heritage and a further 21 per cent are from black or other Asian backgrounds.

Councillor Govind, who represents the city’s Evington ward where one of the four mobile testing stations for the virus has been sited, said he had seen groups of young Asian people gathering during lockdown and he had to use his Gujarati to split them up. 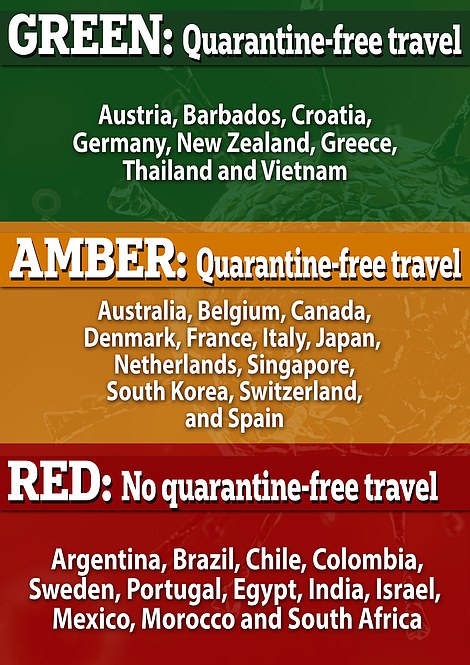 He said: ‘I have seen young people getting together, having a few drinks and conversation. They are just social gatherings.

It was also revealed that public health bosses are trying to track down 300 workers after 166 colleagues tested positive for Covid-19 at a food processing company that supplies Sainsbury’s and Asda elsewhere in the country.

More than 1,000 people work at Rowan Foods in Wrexham, which has seen an outbreak of coronavirus among staff, more than three months after a walkout over concerns there was a lack of protection for workers.

In a statement today, Public Health Wales said: ‘We are working with Betsi Cadwaladr University Health Board to urgently contact just over 300 workers that have not yet presented for testing.’

‘As we would expect with any focused track and trace process, we will identify additional asymptomatic cases. Finding these cases does not mean that the rate of infection in the Wrexham area is increasing as a whole.’ 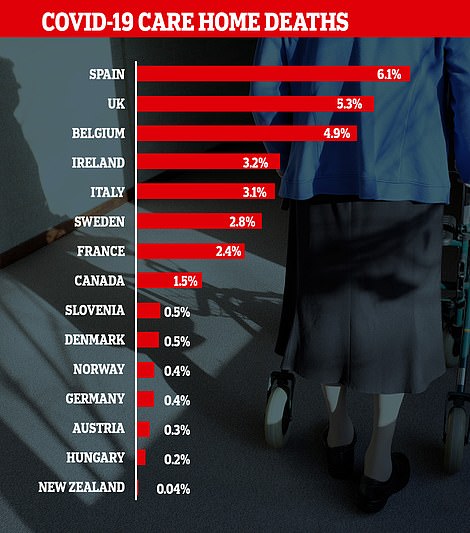 Read More:  Is whole food plant based a mediterranean diet

The UK’s care home death rate is higher than almost any other country in Europe, with one in 20 residents dying of Covid-19. Although its rate is lower than Spain’s, a smaller number of residents means Britain’s total death toll is higher (Data from London School of Economics)

Another study published today found coronavirus has killed more care home residents in Britain than any other European country and the death rate is 13 times higher than Germany’s, a study has found.

London School of Economics researchers say only Spain has seen a larger proportion of its care home population killed by the virus — but its actual death toll is thousands lower.

Up to 5.3 per cent of Britons living in care homes have died since February, when the coronavirus outbreak began to spiral out of control. In comparison, the rate is 6.1 per cent in Spain and just 0.4 per cent in Germany.

Shadow care minister for Labour, Liz Kendall MP, called the statistics ‘appalling’ and said the Government had been too slow to act on protecting care homes.

The study also estimated more than 32,000 people have died in the UK’s population of around 400,000 people living in the care homes — significantly more than official statistics show. Spain suffered around 20,000 deaths,

Bosses in the care sector were left dismayed during the peak of the crisis as they struggled to get protective equipment supplies and tests from the Government.

Experts say care homes were left behind as ministers focused their efforts on preparing hospitals for the pandemic, and it has now been homes bearing the huge burden of coronavirus outbreaks, which continue to rumble on months later.

WHICH ARE THE 71 NHS TRUSTS THAT HAVEN’T SEEN A CORONAVIRUS DEATH IN THE PAST WEEK?