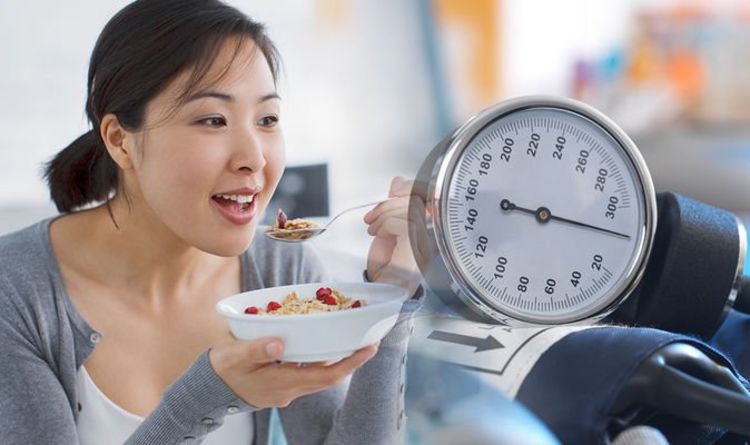 High blood pressure can be reduced by eating breakfast, according to The American Association of Retired Persons (AARP) – whose main aim is to focus on issues affecting people over the age of 50.

Harvard University geriatrician Jinesh Kochar, M.D., and his colleagues, were behind the study.

They gathered data from 13,000 participants who filled out the Physicians’ Health Study I – a long-running survey of male doctors.

The doctors who took part in the study were between the ages of 40 to 86, who didn’t have high blood pressure when they entered the study.

During the 16-year study period, more than 7,000 of them developed the condition.

The men were divided into four groups, based on their breakfast cereal consumption:

Compared to the group who ate no cereal, the researchers discovered that the more servings of cereal the men ate, the lower their chances of developing high blood pressure.

READ MORE: High blood pressure: Bleeding from this region of the body is a warning of hypertension

The odds of developing high blood pressure dropped by seven percent among those who ate one serving of breakfast cereal a week.

These odds declined further, as those who ate between two to six servings had a 12 percent reduction in developing high blood pressure.

Lowering the chances of the condition even more, those who ate seven or more helpings of breakfast cereal had a 19 percent reduced chance of developing high blood pressure.

Which type of breakfast cereal came on top to preventing the health condition?

The answer is whole grains, such as oatmeal and bran flakes, rather than refined-grain cereal, such as corn flakes.

He added that eating wholegrain breakfast cereal, along with other healthy lifestyle measures, may reduce your chances of developing high blood pressure.

So what are the other healthy lifestyle measures Dr Kochar promotes? The answers are limiting your salt intake and exercising more.

The NHS explained further that “salt raises your blood pressure” – and people should aim too eat no more than a teaspoonful of salt per day.

Moreover, staying within the recommended alcohol levels is a good way to reduce your risk of developing high blood pressure.

Alcohol is full of empty calories, which can make you gain weight and further increase your likelihood of high blood pressure.

It’s advised that men and women drink no more than 14 units in one week, and to spread drinking over three days or more if you do reach 14 units.

If you take one bottle of 11 percent ABV wine, for example, it amounts to 8.2 units.

The unit increases further if the bottle is 14 percent ABV wine, making it 10.5 units.

Another example is beer, one 568ml pint (5.2 percent ABV) is equivalent to three units.