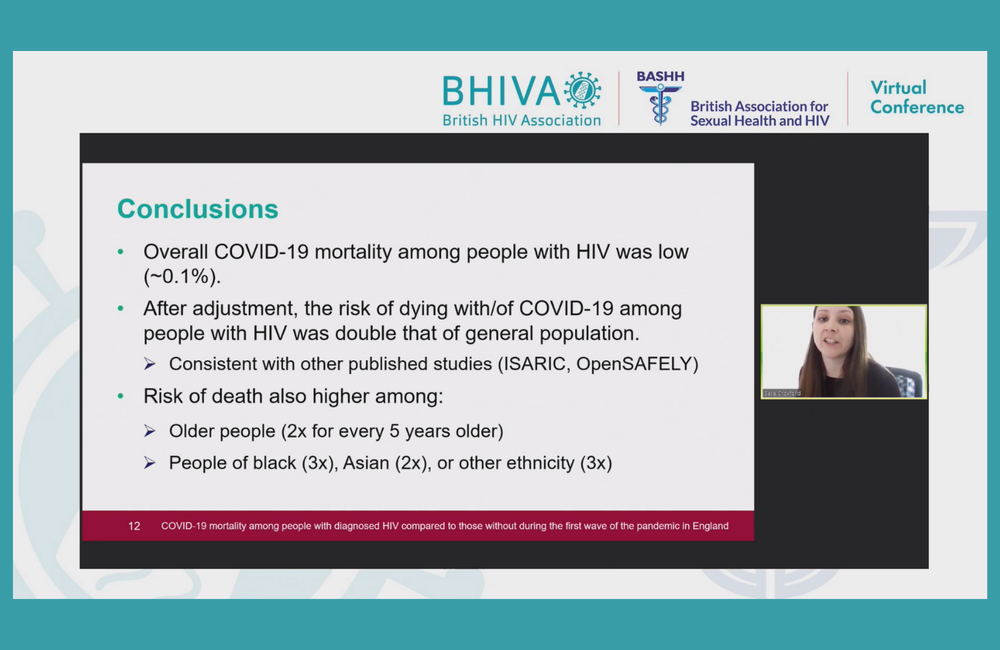 People with HIV in England had double the risk of dying compared to the rest of the population during the first wave of the COVID-19 pandemic up to 16 June 2020, Dr Sara Croxford of Public Health England reported at the joint British HIV Association and British Association of Sexual Health and HIV conference today.

The findings are similar to those of two large studies published in 2020, which also found a raised risk of death from COVID-19 in people with HIV in the United Kingdom.

The Public Health England study found that over two-thirds of COVID-19 deaths in people living with HIV were in Black, Asian or other non-White ethnic groups.

The Public Health England study used HIV surveillance data, which stores anonymised information on people by first initial, date of birth, gender and neighbourhood, and matched these data with reported deaths from COVID-19 to identify all adults with HIV who died from COVID-19 between 2 March and 16 June 2020, the first wave of the pandemic in England.

The researchers identified 99 deaths from COVID-19 in people living with HIV. Detailed clinical records were available in 94 cases. This represents approximately 0.1% of the population of people with HIV in England, showing that overall COVID-19 mortality remained low in people with HIV.

Looking at the entire population, including people with HIV, four factors increased the risk of dying from COVID-19:

The British HIV Association (BHIVA) carried out a registry study of COVID-19 cases in people attending HIV clinics in the United Kingdom, to identify factors associated with severe outcomes. The study collected data between October 2020 and March 2021, the second wave of the pandemic in the United Kingdom.

As this study depends on clinics to submit data, and on the quality of data collected by clinics, this study cannot calculate what proportion of people living with HIV contracted SARS-CoV-2 or experienced COVID-19 symptoms. Furthermore, cases were included on the basis of either a positive COVID-19 test or symptoms that were suggestive of COVID-19. People who had the infection without symptoms and people with infections that did not lead to hospital admission are likely to be under-represented in this study, potentially leading to an overestimate of the risk of severe illness.

Read More:  Suffering from lockdown brain? How to improve memory and concentration

The 1310 cases were predominantly male (62%) and half were aged 50 or over. Thirty-eight per cent were Black African, 56% were born outside the UK or had an unknown country of birth, 34% had an occupational risk for COVID-19 exposure and 16% had close contact with a confirmed COVID-19 case.

Of the reported cases, 78% had symptoms, most commonly fever (47%), cough (51%), shortness of breath (36%) and loss of sense of smell (23%). Fifty-nine per cent of these symptomatic cases had been confirmed by a positive test result. Just under 10% of cases reported were asymptomatic, of which 95% were confirmed by testing.

Looking at the HIV-related characteristics of the reported cases, just under 5% had a CD4 count below 200. Four per cent had an AIDS-defining illness at the time they were diagnosed with COVID-19.

“The findings reinforce the importance of advice for prompt vaccination against COVID-19 for people with low CD4 counts and/or recent AIDS-defining illness.”

Although the median lowest-ever CD4 count was 257, the median current CD4 count was 611. Just under 15% of the sample were judged to be at risk of having recently had a detectable viral load, either because they were not on antiretroviral treatment, had been diagnosed in 2019 or 2020, or had had a confirmed detectable viral load since January 2019.

As for underlying conditions, reported cases had a median of one underlying condition known to increase the risk of severe COVID-19, most commonly high blood pressure (24%), obesity (19%) or raised lipid levels (17%). Thirteen per cent were current smokers. The median body mass index was 28 (IQR 24.5-32.3), placing the majority of the reported cases in the ‘overweight’ or ‘obese’ weight categories.

Twenty-three per cent of cases were admitted to hospital and 18% of the entire caseload had severe COVID-19 presentation that required oxygen support or mechanical ventilation. A severe illness was almost four times more likely in Black African people (odds ratio 3.90, 95% CI 2.46-6.17, p = 0.0001) compared to White people.

Any HIV-related illness included in the list of diagnostic criteria for AIDS, which in the presence of HIV infection result in an AIDS diagnosis. They include opportunistic infections and cancers that are life-threatening in a person with HIV.

Body mass index, or BMI, is a measure of body size. It combines a person’s weight with their height. The BMI gives an idea of whether a person has the correct weight for their height. Below 18.5 is considered underweight; between 18.5 and 25 is normal; between 25 and 30 is overweight; and over 30 is obese. Many BMI calculators can be found on the internet.

The BHIVA group conclude that the findings reinforce the importance of advice for prompt vaccination against COVID-19 for people with low CD4 counts and/or recent AIDS-defining illness.